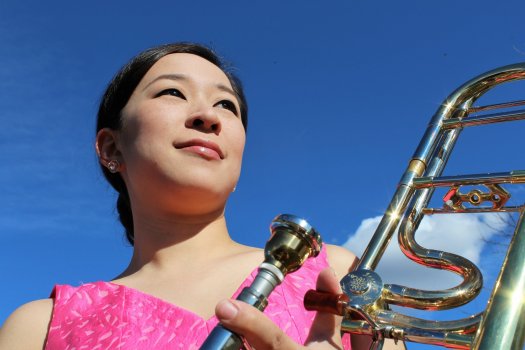 Described by Gramophone Magazine as "eloquent".

Dr. Zenas Kim-Banther is an international soloist, orchestral trombonist, chamber musician, and educator. As a soloist she has been invited on several international stages, including performances with the Athens City Symphony Orchestra in Greece, Croatian Military Wind Orchestra in Zagreb, Altena Brass of the Netherlands, Brass of Peace, and most recently with the University of Maryland Wind Orchestra on their performance of Berlioz' Grand Funeral and Triumphal Symphony. She has given numerous solo recitals, including several appearances at the Kennedy Center’s Millennium Stage in Washington D.C. Zenas was also a finalist of the International Trombone Association’s Gagliardi, Smith, and Alto Competitions. With a passion for expanding the solo repertoire for trombone, she has commissioned cutting-edge solo and chamber pieces from composers Osnat Netzer, Norman Bolter, and Ji-sun Yang.

As an avid chamber musician, Zenas is a core member of the Rodney Marsalis Philadelphia Big Brass, touring across the United States, and worldwide. She has performed at various chamber music festivals, including the Storioni Festival in Eindhoven, the Netherlands, performing with principals from the Royal Concertgebouw Orchestra, and members of the Storioni Trio.

Equally at home as an orchestral player, she was appointed Principal Trombone of Daegu Symphony Orchestra in South Korea, as well as appearing with various orchestras such as the Rotterdam Philharmonic. She has performed under the baton of conducting legends such as James Levine, Kurt Masur, Raphael Frühbeck de Burgos, Herbert Blomstedt, Yannick Nezet Seguin, and Ludovic Morlot. She was also a fellow at Tanglewood Music Center, Banff Centre’s Orchestra Residency Program and National Symphony Orchestra’s Youth Fellowship Program.

With a passion for music education, Zenas was on faculty at the Kye Myung University School of Music as adjunct professor of trombone. She has also held masterclasses at international brass festivals, including in Zagreb and Sao Paulo and at universities across the United States, including George Mason University, Millersville University, and Penn State Eerie. She also maintains a private trombone studio in the Washington D.C. area.

She received a Bachelor of Music from New England Conservatory, studying with Norman Bolter with a double degree in music history. She earned her Master of Music degree from Rotterdam Conservatoire, studying with Jörgen van Rijen of the Royal Concertgebouw Orchestra, and Pierre Volders and Remko de Jager of the Rotterdam Philharmonic Orchestra. She obtained a Doctorate of Musical Arts at the University of Maryland, studying with Craig Mulcahy.

She currently resides in Maryland outside of Washington D.C. with her tubist husband John William Banther and their dogs, Gabby and Maggie.